In her fifth solo album called “The Courtesan”, Sonya Yoncheva unites some eternal female figures, bold and provocative, some of them historical who have remained in the collective imagination under the decidedly romantic colors of the writers and composers of the 19th century.

They highlight particularly the contradictions and tensions that run through a woman’s personality, between the different roles and images she is expected to fulfill, and the ideals and fantasies she is called upon to incarnate. These questions could not be more relevant today.

Words from the artist:

The mysterious world of the courtesans has always intrigued me. I have been captivated by their sensuality, this most feminine language and amazed by their destiny, supreme and tragic at the same time.

I discovered their world via my stage incarnations of some of them… their predestined lives never find balance in any book. As soon as they give up their status in favour of love, only one fate awaits them – death.

Love was not an option, perhaps because the perception of this feeling makes one exclusive, whereas the courtesan is a character that belongs to the public – to all?

In a certain way, I have made a connection between the life of the courtesan and that of a modern diva.

Inspired by her path, I decided to realize this musical work in the CD that you are holding in your hands.

Like Veronica, I wanted to give my voice and dedicate this record to those women who are not always allowed to express themselves.

Violetta, Thaïs, Manon, Mimì, Madama Butterfly, Stephana or Iris – these characters associated with the image of the Courtesan, each in a different way, yet always under the burden of perfection. 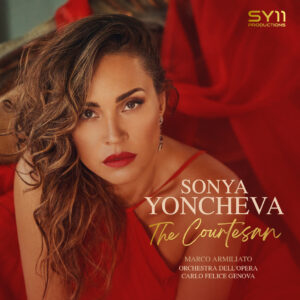